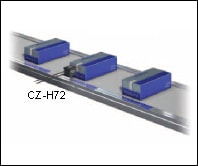 Detects presence/absence of sealing tape. It stably detects patterned transparent sticker without being affected by background colours or patterns. 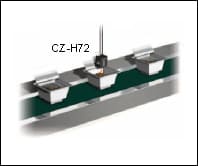 Detects presence/absence of transparent film. It can stably detect targets without being affected by vibration. 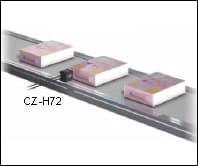 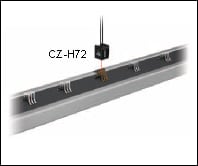 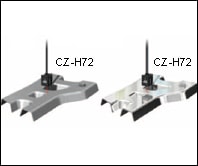 [Automotive/Metal]
Detecting Presence/Absence of Adhesive Agent on a Sealer 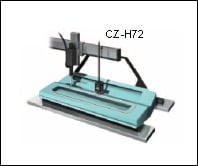 Detects presence/absence of adhesive (low temperature). The sensor head is half the size of conventional models, enabling more flexible mounting. 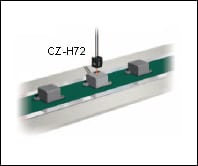 Detects presence/absence of hot-melt coating. It stably detects targets without being affected by the targets' colours or patterns. 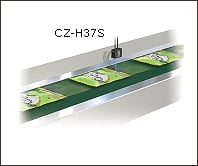 The lustre-cancel type stably detects marks on bags even when the background of the mark vibrates or has lustre. The small beam spot ensures reliable detection of even small marks.

Differentiation front and back side of IC chips The lustre-cancel type, which cancels the influence of specular reflection, stably differentiates between the front and back sides of chips even through a transparent film. 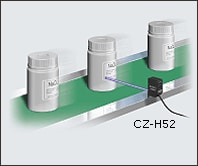 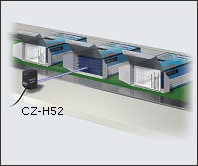 The CZ-H52 detects the fluorescent component contained in paper to check whether the instruction sheet (package insert) is properly inserted into each medicine package.

Detection of presence/absence of invisible print 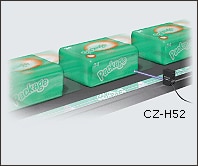 The CZ-H52 detects the presence or absence of the print in invisible ink which contains a fluorescent component. The fluorescence detection UV sensor can stably detect print which cannot be detected with reflective type photoelectric sensors. 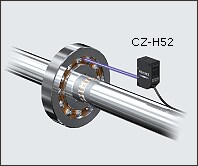 The grease application is checked by detecting the presence/absence of the fluorescent component contained in it. Even glossy metal targets can be stably detected by ignoring the influence of specular reflection. 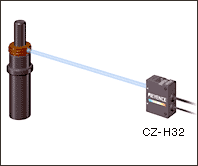 Detecting the presence/absence of O-rings The optimum beam spot can be selected according to the target. Detection by colour recognition is stable even for targets with variable shapes.

Detecting the presence/absence of grease 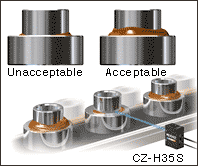 By canceling the influence of surface lustre and target position, the CZ-V20 reliably detects grease, despite its non-uniform shape and position.

Detecting a mark on a tube 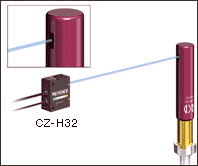 Selecting the small beam spot allows stable detection of small marks even from a long distance. 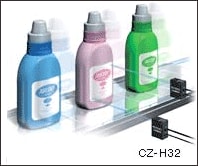 Detection is stable because the colour recognition is not affected by the change in bottle colours. The interference prevention function assures successful detection when two sensor heads are mounted in close proximity.

Detecting the seam on a spray can Even when patterns are printed on spray cans, the sensor detects only the seam. 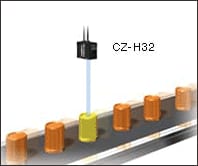 The CZ-V20 Series stably detects subtle colour differences that are difficult to detect with conventional sensors. Since detection is based on RGB components, it is less affected by target position or vibration. 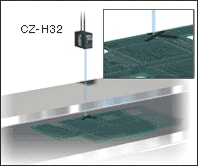